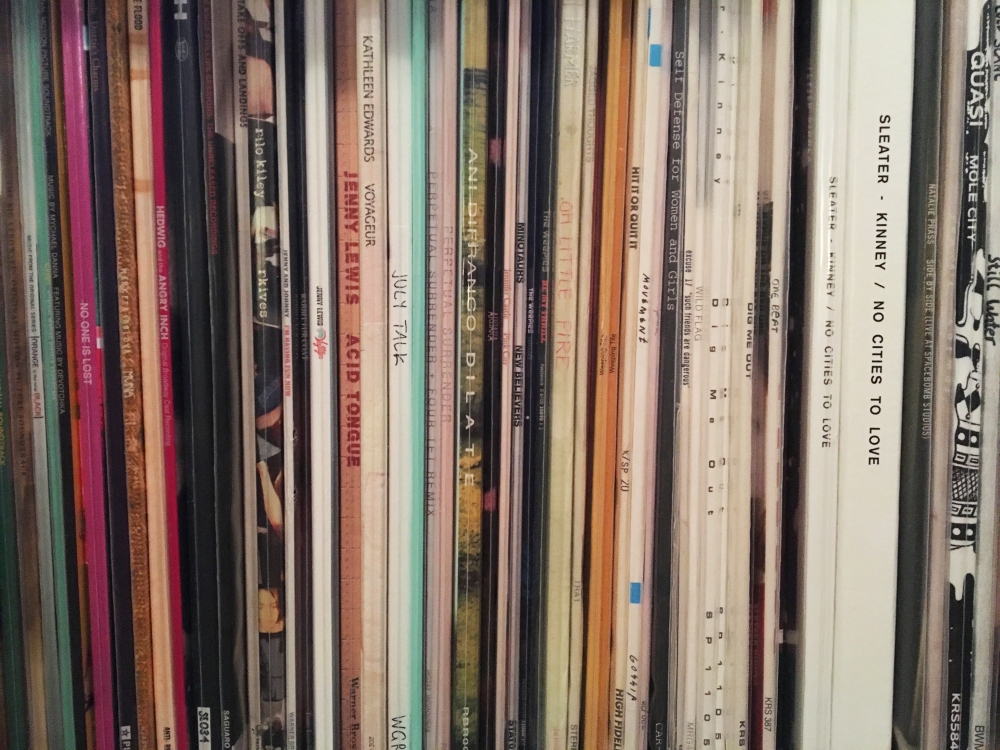 Today is the second day of The Great Escape Festival in Brighton, UK.  A few days ago I ran a preview of the Canadian Blast showcase happening at the festival, featuring interviews with some of the bands. I had asked them about female representation in music festivals, and in the music community in general.

But I couldn’t help asking them about vinyl, too.  I’m always curious about people’s taste in music: their influences, their favorite albums, what kind of vinyl collections they have — if they even buy their music on vinyl.

I suspected that at least some of these Canadian musicians might be into vinyl, though.  In the research I’ve done, it seems that Canada has a greater number of record stores than the US.  Or maybe it’s just that Ontario all by itself has hundreds, even in its furthest reaches.  There’s a shop in Sault Ste Marie.  There’s one in Thunder Bay.  (By contrast, I live in a supposed cultural mecca, yet my closest record shop is 30 minutes away, and it’s not even worth the trip.  I have to drive at least an hour to find anything with a decent selection.)

Also, my favorite current Canadian bands were putting out vinyl before the hipster boom brought it back into popularity.  And there are a number of fantastic Canadian record labels, like Paper Bag, Dine Alone, Nettwerk, Arts & Crafts, and True North.  Vinyl might be as Canadian as the maple leaf.

It was excellent to ask these kick-ass women and their bandmates — most of whom, as I suspected, collect vinyl — about their music collections and most influential albums. Here’s what they had to say.

Q: Are you a music collector?  Do you collect vinyl records?  If so, what is your collection like?

Hannah Georgas: I collect vinyl!  I alphabetized my albums finally not too long ago.  I realized I have a lot more records that I thought.  I’ve accumulated a bunch of vinyl from when I was a kid.  My mom gave me a ton of classical records and then the rest is from what I’ve collected over the past 5 years or so.  I do have a habit of playing the same vinyl over and over.  And the same side, haha!  People get annoyed.  The Sylvan Esso album should be broken because of how many times I’ve played it.

Mo Kenney: I buy a lot of vinyl, but I don’t hunt for rarities or first-press issues … I just enjoy listening on vinyl. My collection isn’t enormous, but it’s getting there! I have a lot of older stuff that I’ve collected since I was a teenager, and I buy a lot of new vinyl now. It’s how I like to listen to music when I’m at home.

Beliefs: You know it! I don’t have a huge collection, but I go through buying phases. The last record I bought was Marie Davidson. After seeing her perform a couple of weeks ago here in Toronto, I’ve been so enamoured by her. I also just bought the new Slowdive at their show here. That’s a band who haven’t aged a day, but have matured a lifetime. Love the new songs. I’ve also been grabbing more ’70s Nigerian comps lately.

Mozart’s Sister: Yeah, I have a collection. I have worked at a record store for a number of years, so I have a small collection that I like a lot. It’s a real mix of stuff, lots of ambient and instrumental records. ’80s and ’70s disco, contemporary experimental and classical music, and ’90s indie rock/pop, mostly.

The Avulsions: Sure, any format. I buy records, but I don’t know if can say that I am a collector in the sense that I have no interest in buying a $300 original pressing from 1978 on Discogs or whatever. I have paid too much money for a few things over the years that were hard to find, but I’m mostly not too nostalgic about it. My overall taste in music is not necessarily well-represented by my collection, which leans more toward recent small-run independent releases because I end up buying records from touring bands quite often. I guess for me, buying records has the function of showing support to artists as much as it does to collecting, or seeking out music I already know. Wanting to support the format makes me more inclined to buy new records, rather than flip through garage sale bins (though this is absolutely worth doing too). I love reissues and curated compilations, and cringe a little bit when I think about how much money Light In The Attic has taken from me. As far as my record collection goes, other than those things, and a bunch of littler-known Western Canadian acts, you’ll find some pretty predictable old post-punk classics—I bought every Joy Division comp/bootleg I could find when I was 19, some early electronic/experimental, ’60s French pop, present-day 4AD-type releases, the remains of a large opera collection I inherited, and way too much emo-hardcore I liked as a teen and should get rid of.

Port Cities: I collect vinyl records, mostly inherited from my parent’s collection: the Beatles, Carole King, Paul Simon, as well as new artists that I fall in love with.

Bad Pop: Yeah, I’ve got a bit of a collection! It is full of records from bands I’ve toured with, records inherited from parents (lots of Talking Heads, The Who, Beatles, Pink Floyd, Zeppelin), some jazz records (Miles Davis, Chick Corea etc.), important records from the late ’90s/early 2000s (Elliot Smith, Radiohead, Grandaddy … ), and some newer stuff I’m digging (Savages, Wye Oak). Oh yeah, and way too many copies of the same vinyl from my own bands that never sold on tour.

Youngblood: I am and I do! My collection is quite diverse, some of my faves are Air’s “Love 2,” Anderson .Paak’s “Malibu,” and then a couple of weird old ’60s spaghetti western soundtracks.

Mauno: None of us would call ourselves legitimate vinyl collectors, especially being surrounded by hardcore collectors all the time. That being said, our guitar player Scott modestly owns probably over a hundred records. His collection represents all of our tastes in its broadness — he has everything from hiphop records to old country to movie soundtracks.

Like A Motorycle: Extensively. When my sister, Zooey Deschanel, left home to be a flight attendant, she whispered in my ear, “One day you will be cool.” Then she told me to look under my bed. “It will set you free,” she said. She told me to listen to Tommy with a candle burning and that I would see my entire future.

Q: What five albums have most influenced your own musical endeavors?

Mozart’s Sister: I’ll give you 5 songs:

Mauno: Between the four of us, the five albums that have most influenced our musical endeavors are:

Bad Pop: This is always a hard question. I acknowledge the hypocrisy in presenting a list comprised entirely of men, but this is what I was exposed to in my younger and more formative years:

Mo Kenney: Uhhhh, that’s tough, but here’s a few records I was listening to whilst recording my latest:

Port Cities: Some records that have influenced us are:

Hannah Georgas: That’s a tough question … Some albums that I have listened to front to back many times over off the top of my head are:

If you’re in the UK, it’s not too late to catch some of these fine performers at the Canadian Blast showcase, happening now at the Great Escape Festival.

Canadian Blast is presented by Music Export Canada, a brand of the Canadian Independent Music Association.